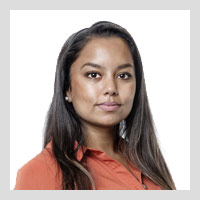 Réshmi has been working as associate at Maverick Advocaten since August 2019. Before that, she worked as a lawyer at Maverick.

Before joining Maverick Advocaten, Reshmi worked for almost 2 years as lawyer at the Netherlands Authority for Consumers & Markets (ACM). During her work at the ACM, Réshmi obtained a post graduate degree in government administration law at the Academy for Government Lawyers. As a part of this specialisation, Réshmi was seconded to the Competition Authority in Curacao.

Réshmi graduated in European law and Dutch criminal law at Utrecht University in 2015. During her master, she worked as student assistant at Utrecht University, European Law, and at the research centre: Utrecht Centre for Regulation and Enforcement in Europe. She wrote her combined Master’s thesis on the balance between European judicial cooperation and judicial protection. Her thesis is awarded as ‘best thesis’ by a professional legal journal, Het Nederlands Juristenblad.

Réshmi obtained her bachelor’s degree in Dutch law from the University of Utrecht in 2012. During her bachelor, she did several (foreign) internships and worked at the legal aid centre in Utrecht.